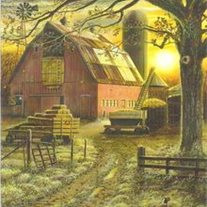 Venture V. Pacilio Venture was born on July 26, 1933, in Gary, IN to the late Joseph and Mary Pacilio. He had one brother, the late Joseph Pacilio, Jr. (Claudette) of North Judson, IN and three sisters, the late Celestina (Wayne) Anderson, of Linden, IN, Frances (Charles) Reidelbach of Monticello, IN, and Mary (Kerry) Ingram of North Judson, IN. Venture married Marilynn Miller of Culver, IN, at St. Mary's of the Lake Catholic Church, Culver, IN on September 12, 1959. They have three children, Michael Pacilio (Cheryl) of Geneva, IL, Margaret Dalphond (Dennis) of North Judson, IN, and Angela Allender (Gregory) of North Judson, IN. They also have twelve grandchildren – Katherine, Amy (John Sadilek), Marie and Brian Pacilio, Jason (Stephanie), Sara (Josh Jungels), and Nicholas Schreyer, and Madalyn, Emma, Hannah, Samuel, and Grace Allender, and two great grandchildren – William Schreyer and Gianna Schreyer. Venture was a grain and dairy farmer, an occupation he dearly loved. He also worked for many years as a Field Reporter for the ASCS government office doing field work. He was on the Wayne Twp. Advisory Board for over 30 years, St. Jacob's Cemetery Board, the board for the new North Judson Fire Department building, and an active member in the Knights of Columbus. He honorably served active duty in the U.S. Army during the years 1955-1957 and for many years in the North Judson Army Reserves. Friends may call from 4-8 PM CT Thursday May 28, 2015 at the O'Donnell Funeral Home, Inc., North Judson, IN. Funeral Mass will be 11 AM CT Friday, May 29, 2015 at SS Cyril & Methodius Catholic Church, North Judson, IN. Burial will be in Saint Jacob Cemetery. In lieu of flowers contributions may be made to the North Judson Town Park, Knights of Columbus, I.U. Health La Porte VNA Hospice, or to the donor's choice.

Venture V. Pacilio Venture was born on July 26, 1933, in Gary, IN to the late Joseph and Mary Pacilio. He had one brother, the late Joseph Pacilio, Jr. (Claudette) of North Judson, IN and three sisters, the late Celestina (Wayne) Anderson,... View Obituary & Service Information

The family of Venture V Pacilio created this Life Tributes page to make it easy to share your memories.

Send flowers to the Pacilio family.