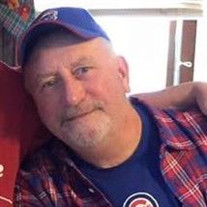 Terry Lee Coldiron I, a loving husband, father, papaw, son, brother, uncle and friend, age 65, passed away Sunday February 3, 2019 at IU Methodist Hopsital in Indianapolis. Terry was born November 18, 1953 in Winamac to Irene and the late Carew Coldiron. On December 9,1972 he married Deborah Clemons. Terry retired from Akers/MAAX of Plymouth, where he was shipping supervisor for 27 years. He enjoyed fishing and hunting, he took pride in mowing his yard, he enjoyed gardening, and he loved feeding and watching his hummingbirds. Terry was a well known Mole Hunter. Something his grandkids loved doing with him. Terry was a lifelong Chicago Cubs fan. Terry and his wife Deborah's favorite thing to do, was spending as much time as they could with their two grandkids. Everyone knew they were the light of his life. Levi, the family chihuahua, will also miss him. Terry loved life and everyone around him. Terry is survived by his loving wife, Deborah of Knox. A beloved son, Terry Lee II ( Karen Scott) of Denham. Two precious grandchildren, Zoey Lilyann and Kane Adam. His mother, Irene Coldiron of Denham, Brother Garry (Patty) Coldiron of North Judson, Sister Ruth (Mike) Toosley of Fulton, Missouri. A Sister Ruby Coldiron of Denham, sister Carol Davis of Knox, sister Wanda Moss of Winamac. He was preceded in death by his father, Carew Coldiron and a brother Larry Coldiron. Visitation will be Wednesday February 6, 2019 at O'Donnell's Funeral Home in North Judson, from 4pm-8pm cst. Funeral services will be held, Thursday February 7, 2019 at 11am. Burial will follow at Oak Park Cemetary in Knox

The family of Terry Coldiron created this Life Tributes page to make it easy to share your memories.

Send flowers to the Coldiron family.