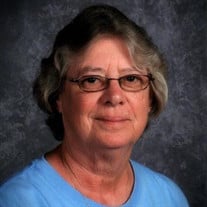 Shirley Fay Frasure was born on February 1, 1952 to Martin and Alvie Frasure. She left this world on June 24, 2020 in Lafayette, Indiana at the age of 68. She was born in Garrett, Kentucky but spent most of her life in North Judson, Indiana. She was preceded in death by her father Martin Frasure, mother Alvie Lawson Frasure, sister Glenna Dean (Deannie) Frasure, sister Shelby Jean Frasure Brewer, brothers-in-law Woodrow Brewer and Thomas Back, nephew Dwayne Kevin Frasure all of North Judson, Indiana and nephew Michael Aaron Rowe of Sevierville, Tennessee, and a host of friends and family. She is survived by her son Thad Garrett Craft, daughter-in-law Sarah Craft, granddaughters Hannah Tess Craft and Rachel Marie Craft, grandson Garrett Arnold Craft of Lafayette, Indiana, brothers Clennon “Bub” (Wanda) Frasure of North Judson, Indiana and Rabion “Rabe” (Brenda) Frasure of Denham, Indiana, sisters Barbara Brewer of North Judson, Indiana, Donna (Ed) Chesney of Naples, Florida, Jane (Jim) Pendl of Robbinsville, North Carolina, Sandy Rowe of Antioch, TN, and many nieces, nephews and cousins. Shirley worked for the North Judson-San Pierre school system for over 35 years. Anyone who knew her called her a friend. She was kind, compassionate, giving, funny, and she always put the other person first. After her retirement from the school, she willingly took her sister, Deannie, into her home and nursed her through her illness until she passed. She spoke often of how proud she was of her son, daughter-in-law and grandchildren. She cherished their visits and always found some way to entertain the kids when they came by, even if it was simply playing with her new kitty companion, Baby. Shirley was not only a sister to her siblings, but she was always proud to call each of them her “friend.” She was loved by all who knew her, and she will be greatly missed by the North Judson community, her family and friends. Viewing: O’Donnell Funeral Home, North Judson, Indiana Sunday, June 28 from 11:00 am – 1:00 pm Service: O’Donnell Funeral Home, North Judson, Indiana Sunday, June 28 at 1:00 pm Burial: Highland Cemetery, North Judson, Indiana Immediately following the service Please in lieu of flowers, send all donations to the NJSP School Corporation for the Special Education Program.

Shirley Fay Frasure was born on February 1, 1952 to Martin and Alvie Frasure. She left this world on June 24, 2020 in Lafayette, Indiana at the age of 68. She was born in Garrett, Kentucky but spent most of her life in North Judson, Indiana.... View Obituary & Service Information

The family of Shirley Frasure created this Life Tributes page to make it easy to share your memories.

Send flowers to the Frasure family.