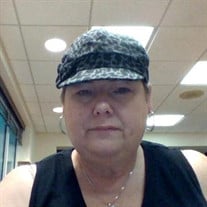 Sherry passed away suddenly, Monday, October 18, 2021 at Franciscan Hospital, Michigan City from apparent heart failure as she entered her work area Friday, October 15th. Valiant lifesaving efforts by prison staff, EMTs and Franciscan personnel were unsuccessful. Sherry was born in Michigan City, IN April 8, 1960 to the late L. B. and Jerry Hatchel. She is survived by spouse Edward Sienkowski, North Judson, son Matthew Sienkowski (Elizabeth), Portage, WI Son James Morlan Jr., Michigan City, IN and Stepson Norman Sienkowski (Kathryn), Greeley, CO. Grandchilden, Josephine (Sophie) Sienkowski and Charlotte Sienkowski. One brother, Anthony Hatchel (Diane), Michigan City, IN, many nieces and nephews. Preceding Sherry in death, her parents, L. B. and Jerry Hatchel, sister, Carol Hatchel. Sherry was employed by Indiana Department of Corrections as a Correctional Counsler for nearly 36 years, at Westville Correctional Center, Miami County, Peru and Indiana State Prison, Michigan City. She was well respected by most of her co-workers and was a positive influence on many inmates serving time at the facility. Many co-workers were appreciative of the positive advice Sherry was able to offer over morning coffee. Sherry was a Life member of Harley Owners group and member of the Kankakee Valley Harley Owners Group since 1991 based at Kersting’s Harley Davidson. Sherry owned and rode her own full-dress Harley for many years. She and Ed went on many trips to Sturgis, SD, Albequerque, NM, Smoky Mountain National Park and many others. She really enjoyed travel on two wheels. Sherry liked dining out on weekends, always looking for a new restaurant to try. During quiet time at home she enjoyed doing word search and crossword puzzles while watching TV. She will definitely be missed by all.

The family of Sherry Hatchel created this Life Tributes page to make it easy to share your memories.

Send flowers to the Hatchel family.