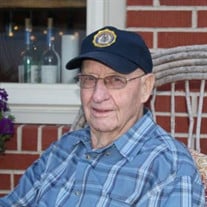 Robert Raymond Hansen, 90, a lifelong farmer and carpenter of Francesville, IN. died on Nov.7, 2020 at the Franciscan Crown Point Hospital after a brief illness. He was born in Denham, IN. on November 29, 1929 to the late Henry and Susanna (Frank) Hansen. He lived in Pulaski County his entire life. He attended public school in Denham IN. He was drafted into to military in 1951 and served with the 44th Field Artillery Division in Germany during the Korean Conflict through 1954. On December 28, 1951 he married Arlene Ruth Beiswanger. She passed away April 22, 1982. On March 30, 1985 he married Lorraine Wroblewski Garling. She passed away December 15, 2018. He was an active member of the St. James -Salem United Church of Christ. He was a member of the Jesse Engle American Legion Post# 228 of Francesville IN. for 34 years serving as commander for 17 years. He was a lifetime member of the VFW Post #1728 in Winamac. Throughout his life he served on many boards and committees. He enjoyed the outdoors, hunting, wood working and dancing. Robert loved his family, church and community. He was a very loving, caring and hard working Christian man. He is survived by his daughters: Brenda (Mike) Finnegan of Francesville, IN, Beverly (Roger) Anliker of Plainfield, IL. Son: Raymond (Terri) Hansen of Francesville, IN. Grandchildren: Clayton, Russell, Erin, Wesley, Shanna, Mitchell and Ethan. Great grandchildren: Milo, Fletcher, Brooks, Francesca, Jeremy, Arlene and Emma Jane. He is also survived by Lorraine’s daughters: Sharon Owens and Carolyn Vogel of Monticello, IN. and their families. He was preceded in death by his parents Henry and Susanna Hansen: first wife Arlene Beiswanger Hansen: second wife Lorraine Garling Hansen. Siblings: Leroy Hansen, June Redlin and Henry Hansen, Jr. Graveside Services will be held 12 Noon CT Tuesday, November 17, 2020 at the Saint James-Salem United Church of Christ Cemetery, Francesville, Indiana. On line tributes and can be left at www.odonnellfhome.com In lieu of flowers please make contributions to the St James-Salem United Church of Christ Cemetery Fund of Francesville In. or the Francesville Fire Station.

Robert Raymond Hansen, 90, a lifelong farmer and carpenter of Francesville, IN. died on Nov.7, 2020 at the Franciscan Crown Point Hospital after a brief illness. He was born in Denham, IN. on November 29, 1929 to the late Henry and Susanna... View Obituary & Service Information

The family of Robert R Hansen created this Life Tributes page to make it easy to share your memories.

Robert Raymond Hansen, 90, a lifelong farmer and carpenter of...

Send flowers to the Hansen family.