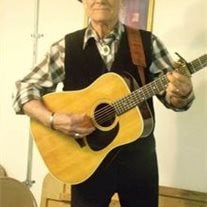 Ralph Raymond Driver, Knox Indiana, went to be with his heavenly father on April 11, 2018. Ralph was born on May 13, 1937 in Dycusburg, Kentucky and lived most of his adult life in northern Indiana. After a long career in construction and automobile repair, Ralph retired in the Knox area. He was a member of the Highway Gospel Church of God in Hamlet, Indiana where he was active in the church band. His devotion to his family, and his firm belief in God supported him and gave him and his family peace in his final days. Ralph was blessed with a very large and loving family, and was preceded in death by his parents, Allie Ray (Porter} and Nellie Gladys (Knight) Driver: Brother: Clifton Garth Driver: Sisters Verna Rae Driver; Thelma Lee Sexton; Glyna Ruth Sanders; and Gloria Fern Blackmon. Ralph was also preceded in death by: Wife Joyce (Burchell) and Wife Brenda (Bridget) Duhon. Ralph is survived by: Wife: Ronna Lou (Cowsert). Sons: Ralph Raymond (Denise) Jr. of Plymouth, In; Michael Lynn (Sheena), of Portage, In.; Roger Nolan (Mary Anne). of Demotte, In.; and William Lee (Becky) of South Haven, In. Daughters, Sharon Jo Roth of Monterey, In.; Linda Chirie Baton of South Haven In.; Tammy Elaine Quinn of Chesterton, In.; and Sandra Louise (Allen) Beckett of North Judson In. Surviving brothers are: Faron of Marion, Ky. and Kamen of Farmington, Ky. Surviving sisters are: Viva Tinsley of Hopkinsville, Ky.; Geraldean Neighbors of Marion, Ky; Brenda Roberts of Old Hickory Tn; Starr (Tom) Lewellen, of Coldwater, Ky.; Becky Conger, of Marion Ky.; and Detra Campbell, of Marion Ky. Ralph was also blessed with 31 Grandchildren; 68 Great Grandchildren, and 4 Great-Great Grand Children and numerous nieces and nephews. Visitation will be Monday, April 16, 2018 at the Highway Chapel Church of God, 7460 E 500 N., Hamlet, In. at 11:00A.M. Central time. Funeral will follow at 1:00. Ralph will be buried at the Highland Cemetery in North Judson, immediately following funeral.

Ralph Raymond Driver, Knox Indiana, went to be with his heavenly father on April 11, 2018. Ralph was born on May 13, 1937 in Dycusburg, Kentucky and lived most of his adult life in northern Indiana. After a long career in construction and automobile... View Obituary & Service Information

The family of Ralph Raymond Driver, Sr. created this Life Tributes page to make it easy to share your memories.

Ralph Raymond Driver, Knox Indiana, went to be with his heavenly...

Send flowers to the Driver, family.