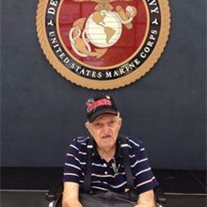 Ocie Rowe, Age 87, of Winamac, IN passed away at 7:57 AM Friday, December 30, 2016 at Porter Regional Hospital, Valparaiso, IN. Ocie was born to John and Myrtle (Montgomery) Rowe, March 5, 1929 in Tip Top, Magoffin County, Kentucky. He was married to Shirley Ivadel Gibbs on February 7, 1953 in Baltimore, Maryland. Ocie lived in various places including Maryland, Virginia, Arizona, California and Hawaii while traveling extensively in his military service. After his retirement from the military Ocie lived mainly in Arizona, Salyersville, Kentucky and spent his last four years residing with his brother, Carson, in North Judson, IN. Ocie enlisted in the United States Marine Corp, September 1945, at an early age of 15. He spent his 16th birthday in China fighting in WW II. He reenlisted and fought in the Korean War and two tours in the Vietnam War as a tank operator. In October 1967, Ocie retired from the Marine Corp with 22 years of service and the rank of Master Sergeant E-8. He was awarded numerous medals, honors and was a recipient of 3 Purple Hearts. He was a Shriner, member of the Masonaic Lodge and a member of the American Legion. Ocie was a Christian, saved and baptized, and a member of the Denham Freewill Baptist Church. Ocie enjoyed Bluegrass/Country music, being with family and friends and loved to attend church and church activities. He loved his hats and his watches. He was proud of his country and what he fought for. One of the things he never left home without was his Marine Corp hat. That was the one thing that he requested be left with him at the hospital during his stays, was his hat. Two words would always bring Ocie to tears…."Semper Fi". He was preceded in death by his loving wife, Shirley Ivadel Rowe of 56 years; parents John and Myrtle (Montgomery) Rowe; four sisters, Opal Mann, Glenna Fay Maupin, Dixie Whitaker and Phyllis Ann Gross. He is survived by three brothers, Floyd Carson Rowe of Winamac, IN, Hillard James Minix of North Judson, IN and Bobby Ray Minix of North Judson, IN; one sister, Hattie Campbell of North Judson, IN; four step children, H.L. (Buddy), Jerrold, R.L. (Larry) Wohlfarth and Sharon Parsons. He has a tremendous amount of nieces, nephews, great nieces and great nephews that will miss him dearly. He will live in our hearts until we join him in heaven. Master Sergeant Ocie Rowe received his last and final discharge papers when he was called home to be with the Lord, where he is awaiting to receive his final reward. A Gathering of Family & Friends will take place 9 AM CT Sunday, January 8, 2017 at the Denham Freewill Baptist Church followed by an 11 AM CT Memorial Service. Burial will be in the Highland Cemetery, North Judson, IN with Military Graveside Services conducted by American Legion Post 92.

Ocie Rowe, Age 87, of Winamac, IN passed away at 7:57 AM Friday, December 30, 2016 at Porter Regional Hospital, Valparaiso, IN. Ocie was born to John and Myrtle (Montgomery) Rowe, March 5, 1929 in Tip Top, Magoffin County, Kentucky. He was married... View Obituary & Service Information

The family of Ocie Rowe created this Life Tributes page to make it easy to share your memories.