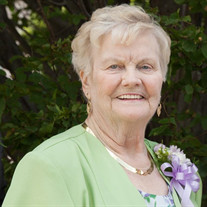 Myrtle Caudill Riedy, 76, died on Sunday, July 21, 2019 at St. Joseph Hospital, Mishawaka, IN. Myrtle was born October 19, 1942 in Wayland, KY. She spent the last 25 years living in Florida, before coming back home to Indiana in April 2019. Myrtle married Bennie (Sonny) Caudill on September 7, 1957 in Lackey, KY. He preceded her in death on June 21, 1992. On April 25, 1998 she married Kermit J. Riedy in Candler, FL. He preceded her in death on January 19, 2019. Survivors include her two sons, James Caudill of North Judson, IN and Tommy (Judy) Caudill of Knox, IN; her three grandchildren Nikkole Caudill, Christopher Caudill, and Elisabeth (Travis) Amor; also surviving is Myrtle’s brother, Gary Mann of Macomb, MI. Myrtle was preceded in death by five brothers, one sister and her daughter-in-law Debbie. Visitation will be Wednesday, July 24th at 11:00 am, with funeral services at 1:00 pm, at O’Donnell Funeral Home in North Judson, IN. Burial will be at Highland Cemetery following services.

The family of Myrtle Caudill Riedy created this Life Tributes page to make it easy to share your memories.

Send flowers to the Riedy family.