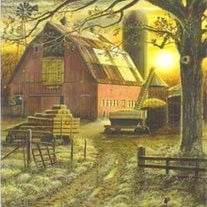 Michael Ronald Schumacher, 77, of San Pierre, peacefully, went home to be with the Lord and be reunited with his parents, on Monday, February 19, 2018. He was the son of the late Mike and Helen(Ficz) Schumacher, born May 11, 1940 in Chicago, IL. After graduating from San Pierre High in 1958, he went on to the Art Institute of Chicago to study fashion, later he enlisted in the Army reserves. On September 25, 1965, he married the love of his life, Ruth Ann Pinkerton. Michael worked at McGills as a Supervisor and retired from MB Manufacturing. He was a member of All Saints Catholic Church. Michael was by no means ordinary in any way. He was an extraordinary husband, father, and grandfather. Stubborn at times, but wonderful. He taught us lessons we didn't even realize he was teaching us until now. He taught us to be strong and to be there for each other when times get tough. He was a Hero in the eyes of his children and grandchildren. He fought a good fight but was tired and ready to meet Our Heavenly Father. He enjoyed quilting, birds, woodworking, gardening and was the king of gag gift stocking stuffers, but his favorite pastime was spending time with his family and watching his grandchildren at various extracurricular activities. He was so proud of his family and loved them very much. He is survived by his loving wife, Ruth, of 52 years, eight children, (yes eight because he loved his in-laws like they were his own), Andrea (Michael) Gerhart; Chad(Tammy) Schumacher; Tony(Linda)Schumacher; all of North Judson and Allison(David)Wenglarz of San Pierre, his grandchildren, Autumn, Kacie, Zack, Morgan, Maddy, Ty, Emily, and Maxwell, and one great grandchild, Hannah. Preceding him in death were his parents, sister, Carol Volk, and infant son, Troy Michael. Friends may call 4-8 PM CT Wednesday, February 21, 2018 at O'Donnell Funeral Home, North Judson, IN Funeral Mass will be held 11 AM CT Thursday, February 22, 2018 at All Saints Catholic Church, San Pierre, IN with Fr. Terry Bennis officiating. Burial to follow at All Saints Catholic Cemetary. Memorial Contributions may be made to the donor's choice.

Michael Ronald Schumacher, 77, of San Pierre, peacefully, went home to be with the Lord and be reunited with his parents, on Monday, February 19, 2018. He was the son of the late Mike and Helen(Ficz) Schumacher, born May 11, 1940 in Chicago,... View Obituary & Service Information

The family of Michael R Schumacher created this Life Tributes page to make it easy to share your memories.

Send flowers to the Schumacher family.