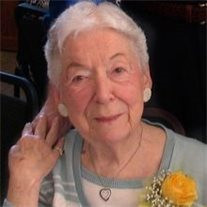 Mary Louise Freeman, Age 97, passed away peacefully on Sunday, October 15, 2017 at Pulaski Health Care Center in Winamac, Indiana. Mary Louise was born on December 7, 1919 in Knox, Indiana to Chester and Ermal Pettis. Mary Louise graduated from Knox High School, Class of 1937. Following graduation, she worked as a secretary at Taitel's Garment Factory in Knox for several years. She married Herbert E. Freeman of Winamac on September 13, 1940. When Herb enlisted in the Army Air Corps in 1943, Mary Louise followed him to Phoenix, Arizona where he was undergoing his advanced training at Luke Field, and got a job as a secretary on base. At the end of the war, she returned home to Knox and awaited Herb's discharge. Several years later, Mary Louise and Herb moved to North Judson and bought Modern Chevrolet from Roy Eichstadt and together they ran that business until their retirement in 1984. In particular, she was the unofficial "social coordinator" during each and every new car model show for their entire career. Mary Louise was active in the community, had many friends and was a member of Eastern Star and the American Legion Auxiliary. She loved being with friends and family, entertaining, rooting for NJSPHS basketball, playing cribbage and traveling. Mary Louise will be remembered by those who knew her for her graciousness, kindness and warm heart. She is survived by her son Anthony Freeman of Everett, Washington. She was preceded in death by her sister Eileen, her parents and her husband of very nearly 72 years, Herb. Per Mary Louise's and Herb's wishes, an American Legion graveside service will be held at Highland Cemetery in North Judson on November 4, 2017 at 10:00am. In lieu of flowers, friends may express condolences via memorial contributions to the North Judson San Pierre High School Athletic Department or the Starke County Historical Society.

The family of Mary Louise Freeman created this Life Tributes page to make it easy to share your memories.

Send flowers to the Freeman family.