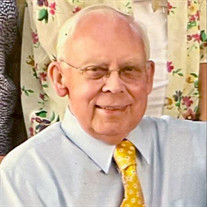 On February 3, 2022 Marvin Paul Peters of North Judson, Indiana entered into eternal life at the age of 87. Marvin was born on August 8, 1934 in Hanna, Indiana. As a young boy he moved to North Judson with his parents Paul and Martha Spenner Peters. Marvin was baptized and confirmed in the Lutheran Church and attended St Peter Lutheran School. He graduated from North Judson High School in 1952 and was proud to continue friendships with his classmates throughout his life. He anxiously awaited his class reunions. On July 14, 1956 Marvin married the love of his life, Ellen Bechinski. They welcomed two daughters , Kathy (Phillip) Brown of North Judson and Karla ( Sonny) Wyland of Plymouth, Indiana, and were the proud grandparents of Josh Brown and Jared (Jamie) Brown. Marvin owned and operated Marv's Body Shop for over 40 years mentoring many young men along the way. He was an outstanding member of the community serving on many local and county boards including Past President of the North Judson Town Council, the San Pierre Bank, a charter member of the North Judson Kiwanis Club, the Mint Festival Committee , the Starke County Economic Development Committee just to name a few. Marvins hobbies included taking his 1959 Ford Skyliner to local car shows and he enjoyed collecting toy trains and attending train swap meets with his grandsons and friends. Marvin was also very proud to be the voice of "The Sounds of Praise" a radio ministry of St Peter Lutheran Church on WKVI Radio. He loved his church family and served them as President of the Congregation, sponsor of the Lutheran Youth program, served as treasurer during the construction of the current building and sang in the choir. He was on numerous committees and boards. Visitation will be held on Wednesday, February 9 from 4-7 pm at O'Donnell Funeral Home, North Judson, Indiana. Funeral Services will be Thursday, February 10 at 11:00 am at St Peter Lutheran Church with visitation one hour before the service. Burial will take place at Highland Cemetery.

On February 3, 2022 Marvin Paul Peters of North Judson, Indiana entered into eternal life at the age of 87. Marvin was born on August 8, 1934 in Hanna, Indiana. As a young boy he moved to North Judson with his parents Paul and Martha Spenner... View Obituary & Service Information

The family of Marvin Paul Peters created this Life Tributes page to make it easy to share your memories.

Send flowers to the Peters family.