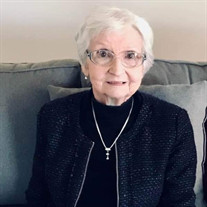 Marlene Louise (Flagg) Marks, our beloved sister, mother, grandmother and great-grandmother, passed away peacefully on the morning of Saturday, March 14, 2020, at the Parkview Haven Retirement Community in Francesville, Indiana. She was born in Starke County, Indiana, on April 27, 1933, the daughter of the late John Flagg and Violet (Fridlund) Flagg. She grew up on the family farm, where she developed a love for birds, squirrels, flowers and gardening. It’s here that her love for entertaining also took root, as she loved summer visits to the farm from her cousins in the Region and the big city of Chicago. Marlene was a 1951 graduate of North Judson-San Pierre High School, where she was a member of the Senior Clarion Staff, the high school’s yearbook. According to a caption she wrote for her senior class photo, she considered herself “an open book.” The following fall, on September 22, 1951, she married Eugene (Gene) E. Marks, beginning a loving relationship that lasted for more than 60 years. She and Gene were members of a couples group that gathered often to play cards. She also played piano and sang in the church choir and enjoyed Wednesday lunches at the Fingerhut Bakery. She always told people she was blessed with family and friends. She is survived by a sister, Donnis Flagg of Owensboro, KY; by one daughter, Jeannine (Bob) Browning of Bargersville, IN; and four sons, Jerry of Indianapolis, Jon (Kathy) of Valparaiso, Jeff of Needville, TX, and Jay (Connie) of Morgantown, IN. She is also survived by 15 grandchildren and 30 great-grandchildren. She was preceded in death by a grandson, JJ, by one son, James (Jimmy) and her husband, Gene. In light of the pandemic, no memorial service has been scheduled at this time. Memorials may be given to the North Judson United Methodist Church, 210 Central Ave. (http://njumc.com/); Peyton Manning Children’s Hospital at St. Vincent Indianapolis (http://www.peytonmanningch.org/); or the Ronald McDonald House. Arrangements were made by O’Donnell Funeral Home, Inc., North Judson

Marlene Louise (Flagg) Marks, our beloved sister, mother, grandmother and great-grandmother, passed away peacefully on the morning of Saturday, March 14, 2020, at the Parkview Haven Retirement Community in Francesville, Indiana. She was born... View Obituary & Service Information

The family of Marlene Marks created this Life Tributes page to make it easy to share your memories.

Send flowers to the Marks family.