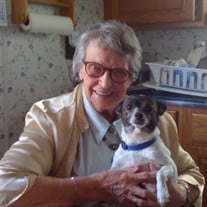 Lucinda Hayes 82 of North Judson, IN. Lucinda passed on November 2, 2018 at home. She was born August 21, 1936 in Swampton, Ky to the late Lurman and Eliza (Eldridge) White. On February 14, 1959 in North Judson, In she married Fredrick Hayes.... View Obituary & Service Information

The family of Lucinda Hayes created this Life Tributes page to make it easy to share your memories.

Lucinda Hayes 82 of North Judson, IN. Lucinda passed on November...

Send flowers to the Hayes family.