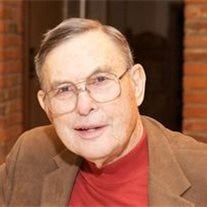 Marvin Dwain McLaughlin was born in Lebanon, Indiana, on Dec. 7, 1929, to Claud P. and Olive I. Payton McLaughlin. He grew up on farms in Boone County Indiana (eventually working his way through college by baling hay), and was graduated from Dover High School in 1948. He went on to Butler University where he enjoyed playing clarinet in the marching band all eight semesters, joined Lambda Chi Alpha fraternity, and earned his degree in liberal arts. Also of great significance during Marvin's Butler years was meeting Barbara Leonard who became his wife on Aug. 24, 1952, in Russellville, Indiana. Marvin received his law degree at the Indianapolis Division of the Indiana University School of Law. He opened a law practice in Indianapolis but longed for the small-town atmosphere of his youth. He and Barbara welcomed the opportunity to move to North Judson in 1957 to open a practice there, bringing their 2-year-old daughter, Lynette. His practice grew, as did his family, welcoming Alan in 1957 and Brian in 1963. He was elected Starke County Prosecuting Attorney, serving four years, and became Judge of the Starke Circuit Court in 1963. In addition to family, friends, and members of the Starke County Bar, of special note at that first swearing-in ceremony was former Indiana Governor Henry F. Schricker. He went on to serve Starke County as Circuit Court Judge until he retired in 1992. Retirement did not slow Marvin down, as he was granted Senior Judge status, traveling all over the state of Indiana to fill the bench in other counties. He also presided over innumerable mediations and arbitrations, showing a special talent for bringing parties together. Marvin was elected and served four years on the Starke County Council, continuing his tradition of public service. Marvin was a board member of the Starke County Historical Society, a member of the North Judson Kiwanis Club, and a former president of the North Judson Chamber of Commerce. He was active in Bluejay Athletic Boosters, Toastmasters Club, and was a 4-H leader for many years, after having grown up as a 4-H member. He was active in the Starke County Bar Association, the Indiana Judges Association, and was a 50-year member of the Indiana State Bar Association. Marvin was an active member of North Judson United Methodist Church where he served in many capacities including teaching Sunday School and singing in the Chancel Choir. Marvin was honored as a Sagamore of the Wabash in 1992 and received the Henry F. Schricker Award for service above self in 2010. He participated with other notable community members as a Torchbearer in the Indiana Bicentennial Torch Relay in 2016. Marvin loved being with his family and friends, and enjoyed woodworking, playing euchre, traveling, jigsaw puzzles, fishing, telling jokes, and watching sports, especially Butler University Basketball, the Indianapolis Colts, and the Chicago Cubs. He was preceded in death by his parents and sister-in-law, Nancy Leonard. His family legacy includes his wife of 65 years, Barbara L. McLaughlin, children Lynette K. (David C.) Altman of North Judson, Alan L. (Barbara G.) McLaughlin of Denver, CO, and Brian L. (Dawn F.) McLaughlin of Noblesville, IN, sister Eileen D. McLaughlin of Thorntown, IN, and brother-in-law Charles D. (Janet H.) Leonard of Noblesville, IN. Grandchildren include Evan (Sarah) Altman of Brownsburg, IN, Kenton (Nichol) Altman of Noblesville, IN, Meredith (Aaron) Kaluf of Columbus, IN, Kate McLaughlin of Boston, MA, Reed McLaughlin of Denver, CO, Laura McLaughlin of Nashville, TN, and Tyler McLaughlin of Noblesville, IN. He was also blessed with seven great-grandchildren: Addison and Ryne Altman, Kaden and Kyla Altman, and Archer, Amelia, and Nora Kaluf. A Celebration of Life will take place on Sunday, October 29, at 1:30 p.m. Central Time, at North Judson United Methodist Church, 210 W Central Ave. The service will be followed by a time of visiting and refreshments in the church Fellowship Hall. Memorials may be made to the McLaughlin-Leonard Family Community Fund or the North Judson United Methodist Church Trustees' Building and Maintenance Fund through the Northern Indiana Community Foundation.

Marvin Dwain McLaughlin was born in Lebanon, Indiana, on Dec. 7, 1929, to Claud P. and Olive I. Payton McLaughlin. He grew up on farms in Boone County Indiana (eventually working his way through college by baling hay), and was graduated from... View Obituary & Service Information

The family of Judge Marvin D McLaughlin created this Life Tributes page to make it easy to share your memories.

Marvin Dwain McLaughlin was born in Lebanon, Indiana, on Dec....