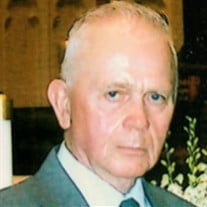 Joseph H. Boisvert, 87, passed away Sunday January 10, 2021 at his home surrounded by his loving family. Joseph was born April 11, 1933 in Hammond, IN to the late Joachim and Florida (Allie) Boisvert. On August 16, 1958 in Calumet City, Illinois where he married the love of his life Catherine Cengel. Joseph was a Veteran, having served in the Army. Joseph was a Retired Steel Worker from Blaw Knox in East Chicago, Indiana where he was employed for 35 years. He spent his retirement years operating his own Bait Shop, as well being a Private Ground’s Keeper for Toad Hall in English Lake, Indiana Joseph always enjoyed being with his family and all of his friends, as well as hunting, fishing, camping, and going on vacations. Joseph survived by his loving wife of 62 years, Catherine "Penny" of North Judson, IN. As well his four children Joseph (Donna) Boisvert, of San Pierre, IN , Thomas (Lisa) Boisvert of Winchester, Va, Kathy (Mike) Risner, of North Judson, IN and Rick(Juli) Boisvert, of North Judson, IN, 5 Grandchildren, and 15 Great-Children. He was preceded in death by two brothers, Leo E. Boisvert and Fabian J. Boisvert, Two Sisters: infants Darlene and Adeline Boisvert, a sister, Viola R. Chumbley. Visitation from 4-6pm, Friday January 15th at O’Donnell Funeral Home, North Judson, with a 6pm(CST) Rosary Service. A private memorial will be held at a later date. In lieu of flowers, donations may be made to VNA Hospice of Porter County 501 Marquette Street Valparaiso, Indiana 46383 Arrangements were made by O’Donnell Funeral Home, Inc., North Judson

Joseph H. Boisvert, 87, passed away Sunday January 10, 2021 at his home surrounded by his loving family. Joseph was born April 11, 1933 in Hammond, IN to the late Joachim and Florida (Allie) Boisvert. On August 16, 1958 in Calumet City, Illinois... View Obituary & Service Information

The family of Joseph H Boisvert created this Life Tributes page to make it easy to share your memories.

Send flowers to the Boisvert family.