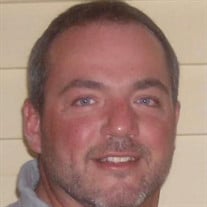 Johnny Joe Hinman, 50 years old, passed away February 12, 2021 (April 23, 1970 – February 12, 2021) Johnny was born April 23, 1970 in Rensselaer, IN to his mother, Sharon Stalbaum (Wills) and father, David Hinman. Johnny was raised in San Pierre, IN and graduated from North Judson High School. He later moved to DeWitt, IA to follow his welding career. Johnny’s pride and joy was his two sons, Jonathan Hinman and David Hinman. Johnny was a wonderful father to both boys and loved them to the moon and back. Johnny loved spending time with family and friends. He was the life of the party. He would do anything to get a laugh. Johnny knew no strangers. He befriended everyone he came in contact with. Johnny was preceded in death by his father, David A Hinman, and his brother, David Hinman Jr. Johnny is survived by his mother, Sharon Stalbaum, Step Father, Larry Stalbaum, Son, Jonathan Hinman, Son, David Hinman, Sisters, Lee Hinman, Kellie Brower, Jenniffer Neira, Brother, Richard Hinman (wife, Susan Hinman), Step siblings, Daryl, Bobbie, Peggy and five nieces, four nephews along with sever great nieces and nephews. There will be a Visitation on Saturday, February 27, 2021 from 12 noon to 2pm Central time at O’Donnell Funeral Home, 302 Lane Street, North Judson, IN. At 2pm there will be a short memorial service.

The family of Johnny Joe Hinman created this Life Tributes page to make it easy to share your memories.

Send flowers to the Hinman family.