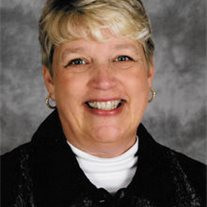 JENNIFER M. DAVIS February 2, 1952 – October 26, 2016 KNOX, IN – Eternal rest was granted unto Jennifer Marie Davis on Wednesday morning, in the comfort of her home, with family and dedicated caregivers after becoming physically bound by the devastating effects of ALS (Lou Gehrig's disease) following a diagnosis on September 23rd of last year. She never lost her endearing sense of humor or the passionate commitment to her family, friends and community. She and her beautiful smile will be missed for years to come. Life began for Jennifer in Logansport, IN on February 2, 1952, the first of nine children born to William G. and Alma Jean (Ash) Davis. She was baptized in St. Peter's Catholic Church in Winamac. She and her siblings were raised in North Judson where her father and Uncle Homer operated Davis Plumbing & Heating and later, B&H Supply in Knox. Jennifer graduated with the Class of 1970 from North Judson-San Pierre high school where she was involved in many activities. Jennifer then attended St. Joseph's College in Rensselaer where she received her BS in Marketing and served as secretary of the Athletic Department all four years. Upon graduation, she took an immediate position at the request of then Ft. Wayne Mayor Ivan Lebamoff to serve as the coordinator for the Allen County Democratic Party. At a family Christmas party on December 23, 1974 she was introduced to Charles W. Weaver of Knox. The couple took their vow of Holy Matrimony at SS Cyril & Methodius the following year on November 28, 1975. Together they made Starke County their home. They became the proud parents of two sons, Nicholas Charles Davis Weaver & Kelly of St. Louis, MO and grandson Jack Michael Davis Weaver and Benjamin Joseph Davis Weaver & Anne-Marie of Brooklyn, NY and grandson Charles Francis Weaver. Throughout their lives they knew she simply believed in the best of them. She was their biggest supporter and someone they could turn to for guidance and answers. The family worshiped for over 30 years at Ancilla Domini in Donaldson, where they always felt at home. Jennifer's fondest memories there were at Easter vigil and Christmas when the family was involved in the Liturgy with Nicholas and Benjamin serving as torchbearers, Charlie in the choir and she playing handbells with Sr. Nora. Beyond her Savior, she loved her entire family first and foremost. Her siblings include William G. & Cheryl Davis of Knox, Susan Davis (deceased), Carolyn Davis (deceased), John R. "Jack" Davis of North Judson, Laura Sharkozy & Mike of North Judson, Margaret & Gerald Christoff of Mt. Airy, MD, and twin sisters Stephanie Hochstedler of Indianapolis and Barbara Davis of Columbus, OH. Numerous dear nieces and nephews also survive. Jennifer was at her best when surrounded by her many and diverse friends. She truly cherished the opportunity to celebrate others with a simple gesture, grand surprise or thoroughly planned party. She was as well known for her creativity when it came to theme parties - from Olympic tests of skill and strength, to the night she rented an entire train for a costume mystery dinner - as she was for her ability to throw together appetizers and drinks for unexpected visitors. She was always seeking to create new friendships and more often trying to connect others to form life long bonds. In Jennifer's life there was no such thing as a casual friend as she loved all as if they were her best friend. She very simply cherished spending time with the people she loved most in her life. Jennifer was a respected career woman who was trustworthy, compassionate and one who stayed true to her principles that always were considerate of others. She had the ability to seek out what was important and not point to the existence of flaws. She initially held a position as a grant writer for KIRPC, Kankakee-Iroquois Regional Planning Commission, then onto public relations and marketing mostly in the health care industry with Starke Memorial Hospital in Knox, Lindenwood Retreat Center at Donaldson and Doctor's Hospital in Mishawaka. She served as Secretary and on the Board of Directors for the Indiana Physicians Hospital Association and member of the Indiana Hospital Association Government Relations Council. In 2007 she was recipient of The Mercy Award, LifePoint Healthcare Award in Recognition for Community Service. Always civic minded, Jennifer helped develop a program for expectant mothers which became the first W.I.C. Program in Starke County. She has served on the Board of Directors for: Starke County Community Foundation, Starke County Legacy of Women, The Broadway Theater League and the Marshall/Starke Development Center, Past President. She was a Starke County Commissioner and two-term County Council Woman. In 2012 she was the winner of Oprah Winfrey's national essay competition; "100 Women, 100 Pair of Shoes" in which 100 women in Starke County received shoes. Words cannot express the gratitude Jennifer's family has for those who assisted along this journey including Curt Bejes MD, Peggy O'Connor, care coordinator for the ALS Association - Greater Chicago Chapter, her 24-hour caregivers Angela Courtney, Teresa Davis, Madrina Barnes, Tyrie Owens and Angela Schwenk along with many other individuals who provided numerous acts of support and kindness. A celebration of Jennifer Marie Davis' life will be held on Tuesday November 1st from 4-8 p.m. CT at the O'Donnell Funeral Home, 302 Lane St., North Judson, IN. A Rosary will be held at 4 p.m. in the funeral home led by the Poor Handmaids of Jesus Christ. A Memorial Mass will take place at 10 a.m. CT in SS Cyril & Methodius Catholic Church, 303 Keller Ave., North Judson, IN with Fr. John Zemelko as celebrant. Burial will follow in the St. Jacob Cemetery, North Judson. Following the burial, all are invited to a luncheon and time of continued sharing in the fellowship hall of the First United Methodist Church, 210 Central Ave., North Judson. In lieu of flowers, memorial gifts may be given to the ALS Association – Greater Chicago Chapter, 220 W. Huron St., continued... 1 2 Next ...continued Suite 4003, Chicago, IL 60654 or the Carolyn – Susan – William Davis Foundation c/o the Starke Co. Community Foundation, 310 Lane St., North Judson, IN 46366. Previous 1 2

JENNIFER M. DAVIS February 2, 1952 &#8211; October 26, 2016 KNOX, IN &#8211; Eternal rest was granted unto Jennifer Marie Davis on Wednesday morning, in the comfort of her home, with family and dedicated caregivers after becoming physically... View Obituary & Service Information

The family of Jennifer Davis created this Life Tributes page to make it easy to share your memories.

Send flowers to the Davis family.