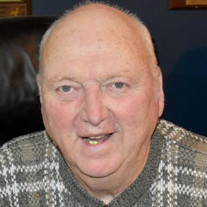 Guy A. Gardin, 82, of North Judson passed away Thursday, May 6, 2021 at his home. He was born September 1, 1938 in Chicago, Illinois to Gosta and Elsa (Persson) Gardin. On April 4, 1964 he married Carolyn M. Schappaugh, who preceded him in death. Guy was a graduate of San Pierre High School, Class of 1956. He was a union carpenter and contractor, and an owner/partner in Gardin & Weitgenant Construction, Inc. before his retirement. Over the years Guy served in several capacities as a member at St. Peter Lutheran Church, including trustee, lay minister, and elder. He was a North Judson Town Board member for 12 years, and enjoyed being politically active. Guy was known for his friendly demeanor and his booming laugh. He was famous for whistling and making up silly songs about almost anything you could think of. Guy greatly enjoyed preparing food for holiday celebrations, and his family especially looked forward to his Swedish smorgasbord at Christmas. His children and grandchildren enjoyed listening to his stories of his boyhood antics and pranks on his parents’ farm. He would often take time after work to run races or target shoot with his children. He was a man of great faith in Jesus Christ, and he shared that faith with many people throughout his life. Survivors include his children Lori (Ted) White of North Judson, Steven (Jan) Gardin of Wichita Falls, TX, Lisa (Greg) Engel of Medaryville, and Lanette Gardin (Stephen Reif) of Valparaiso; sisters Judith Weitgenant of North Judson and Inger (Paul) Friend of Angola; brother David (Susan) Gardin of Valparaiso; grandchildren Samantha (Robb) Stephenson, Adam (Liz) Engel, Thaddeus (Jessica) White, Marc (Andrea) Gardin, Jonas (Kacie) White, Thomas Gardin, Simon (Amanda) Engel, and Jacob (BreeAnna) Gardin; and great-grandchildren Lucy, Henry and Annabelle Engel and Charlotte Gardin. He was preceded in death by his parents, his wife Carolyn, sister Lily Nichols, and brothers Roy Gardin, Ronald Gardin, and Kent Gardin. Visitation will take place from 5:00-7:00 PM CT Monday, May 10 at O’Donnell Funeral Home in North Judson, and from 11:00 AM CT until the service at 1:00 PM CT Tuesday, May 11 at St. Peter Lutheran Church in North Judson, with Rev. Dan Speckhard officiating. Burial will be in San Pierre Public Cemetery in San Pierre, IN.

Guy A. Gardin, 82, of North Judson passed away Thursday, May 6, 2021 at his home. He was born September 1, 1938 in Chicago, Illinois to Gosta and Elsa (Persson) Gardin. On April 4, 1964 he married Carolyn M. Schappaugh, who preceded him in death.... View Obituary & Service Information

The family of Guy Gardin created this Life Tributes page to make it easy to share your memories.

Send flowers to the Gardin family.