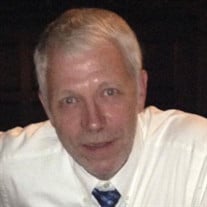 Guy Kent Akers of Knox (64), died peacefully at Northwest Hospital in LaPorte, on Tuesday morning March 29th, 2022, after a battle with cancer. Guy was born Nov 12th, 1957, to Rolland and Joy Akers of North Judson, who both preceded him in death. Guy was a lifetime resident of Starke County, and a 1976 graduate of North Judson San Pierre High School. Guy worked for American Oak Preserving Company in North Judson for 45 years, much of that time serving as Plant Manager. He was very involved in the North Judson Little League where he served as both a coach and League President in the late 70s and early 80s, and was an avid golfer playing in the Hamlet Golf League for many summers. Guy was married to Marilou Bontilao, on November 30th , 2002, at the North Judson United Methodist Church. In their almost 20 years of marriage, they traveled extensively throughout the U.S., and made several trips to Asia. Guys was a dedicated fan of all the Chicago sports teams (especially the Bears and White Sox), and an avid follower of both the Colts, and Purdue Football and Basketball. A big fan of local High School Athletics, he attended many football and basketball games in the community over the past 40 years, and was also a huge fan of the Indy 500, having attended over 25 races with friends and family over his lifetime. Guy is survived by his wife Marilou, his brother Neal (Anita) Akers of Brems, his sister Jill (Joel) Scutchfield of Johns Creek, GA, Nephews Nathan (Courtney) Akers, Devin Akers, Justin (Megan) Scutchfield, Niece Jennifer (Jack) Eastman, four Great Nephews, one Great Niece, a God Daughter, two Uncles, two Aunts, and eight cousins. Guy touched many people during his time on earth, his family (especially his Niece and Nephews), and the many people he worked with at American Oak over the years, along with all those he knew in the community. He will be greatly missed by all who knew and loved him. A Gathering of Family & Friends will be held from 9 AM to 11:30 AM CT Saturday, April 2, 2022 at the North Judson United Methodist Church with Services following at 11:30 at the church.

Guy Kent Akers of Knox (64), died peacefully at Northwest Hospital in LaPorte, on Tuesday morning March 29th, 2022, after a battle with cancer. Guy was born Nov 12th, 1957, to Rolland and Joy Akers of North Judson, who both preceded him in death.... View Obituary & Service Information

The family of Guy K Akers created this Life Tributes page to make it easy to share your memories.

Send flowers to the Akers family.