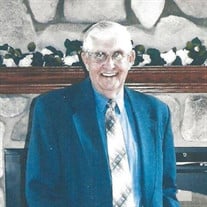 Glenn L. Wallace, of Knox, left his Christian life here on earth for his eternal home in heaven on Tuesday, October 19, 2021, at the age of 85. Glenn’s life began in Hammond, IN on September 13, 1936. He was born to Charles O. Wallace and Hannah Amm Wallace, both deceased. He was the oldest of 11 children that included two sets of twins and one set of triplets. Glenn was baptized into the Lutheran faith July 3, 1938. He was then confirmed in 1953 at Our Redeemer Lutheran Church in Knox. He graduated from Knox Community High School in 1954 and enlisted in the US Air Force shortly after in 1955. Although he was far away, his heart was longing to be back in Knox, Indiana. On October 15, 1955, in Knox, Indiana, Glenn made it in the knick of time to marry his high school sweetheart Beverly E Johnson, she survives him. Truth be known, he won over the heart of her parents Albin and Bonnie Johnson, through his ping pong skills. Glenn and Beverly had a very fulfilling life together. On October 15, 2021, they celebrated their 66th wedding anniversary! Even though Glenn was hospitalized he made special plans and his family helped carry out his wishes. Their journey together blessed them with three children David Wallace (Kim) of Laporte, Donna Collins (Wilbur) of Knox and Denise Newsome of North Judson. They always knew their father was strong and a fighter, but these last few days confirmed that. Glenn “Grandpa Wallace” was a dedicated family man. He enjoyed every minute spent with his grandchildren. Longing to see him again are his five grandchildren who believe in their hearts that they will see him again someday: Sarah (Robert) Shidler, Isaiah (Alicia) Collins, Adam (Jessica) Wallace, Elizabeth Wallace and Dewight Newsome II. He was also blessed to have nine great grandchildren that were always there to help: Drew (Leslie), Hannah, Nolan, and Ryker Shidler, Kerslynn and Kash Collins, Cort, Jacoby, and Willow Wallace. In 1958, Glenn returned from the air force and began farming on the Kline Family Farm. He enjoyed working in the field and spent many years learning and teaching life lessons of working hard and doing your best. Glenn’s career continued with the United States Postal Service by running rural route #4. He had a wave for everyone he passed and enjoyed watching the children along his route grow. After retirement from the United States Postal Service in 1998, he stayed busy farming and woodworking. He was a proud “Bluejay Fan” and was always there to cheer on his children, grandchildren and great grandchildren in their sports and 4-H activities. Glenn was an active member of St. Peter Lutheran Church of North Judson, serving his Lord in various roles throughout the years. He also served on the Starke County Fairboard, Starke County Co-Op Board of Directors and the North Judson San-Pierre School Board. Left missing him are his brother and sisters Kenneth Wallace (Cindy), Nancy Back (Angelo), Karen Keehn (Larry) all of Knox, sisters-in-law Ivyl Wallace of Knox and Nancy Blemaster of Venice, Florida. Anxiously awaiting Glenn at the heavenly gates was his grandson Andrew “Andy” Wallace, parents Charles and Hannah Wallace, twin sisters Darlene and Marlene Wallace, sister Linda Holbrook, triplets Dean, Dale and Dennis Wallace and brother William Wallace celebrating his arrival. Those planning an expression of sympathy may consider a gift to St. Peter Lutheran Church and School in North Judson Visitation will be 11 AM CT Wednesday, October 27, 2021 at Saint Peter Lutheran Church, North Judson, Indiana followed by Funeral Services at 1 PM CT at the church. Burial will be in the Highland Cemetery.

The family of Glenn L Wallace created this Life Tributes page to make it easy to share your memories.

Send flowers to the Wallace family.