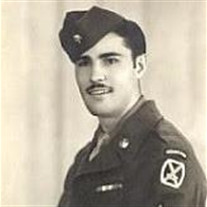 Gerald T. Parascandolo of North Judson, Indiana, passed away peacefully on December 22, 2018. Gerald was born January 7, 1925, in Brooklyn, New York, to Andrew and Josephine (Maimone) Parascandolo. Gerald is survived by his wife, Kathleen (Picchietti), and four children: Brian (Judy) Paras, Carol (David) Swihart, Kathy Paras, and Mark (Lola) Paras. He is also survived by his brother Dominic Parascandolo and sister Cecelia Brookfield. He leaves behind nine grandchildren and six great grandchildren. A veteran of WWII, Jerry served in the US Army’s 86th Infantry of the 10th Mountain Division and saw combat in the Po Valley in Italy. He earned nine medals of distinction, including the Bronze Star and the Purple Heart. After his release from active duty in 1945, Jerry returned to service in the Army Reserves and earned a commission, retiring with the rank of Colonel. During his time in the Reserves, he opened the nation’s first 100-man Army Reserve Center in North Judson, Indiana, dedicated in 1959. In total, Jerry gave 40 years of service to his country. As a businessman in North Judson for over 50 years, Jerry owned and operated the North Judson Lumber Yard. He served on various boards and committees in the region including the NJSP School Board, the Starke County Hospital Board, North Judson Fire Department Volunteer, SS Cyril & Methodius Church committees, and the Mint Festival Board. Jerry was dedicated to family, faith, and country. He loved his family and was elated with each new addition. His faith guided him throughout his life, offering him comfort in his final years. Jerry’s military service symbolized his strong sense of duty and honor for his country, a great source of pride. A wake will be held at O’Donnell Funeral Home, North Judson, Indiana, on January 4 from 4-7 PM (CST). A Mass of Christian Burial will be celebrated at SS Cyril & Methodius Catholic Church, North Judson, Indiana, on Saturday, January 5, at 10:30 AM (CST). Memorial contributions can be made to the Kathleen and Gerald Paras Family Fund through the Northern Indiana Community Foundation, Inc. by visiting nicf.org.

The family of Gerald Parascandolo created this Life Tributes page to make it easy to share your memories.

Send flowers to the Parascandolo family.