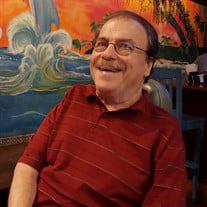 God called "last call" for Frank Carl Deli II, former owner of the Oasis in San Pierre, Indiana, Sunday, April 14, 2019 at the age of 69. He left so quickly we imagined he must have taken a hole shot and set a track record John Force may never beat for the win! Born September 20, 1949 in La Porte, Indiana to his beloved parents, Augusta Jane (Stephenson) and Frank Carl Deli of Starke County, Indiana. He went to school in Knox and was graduated from North Judson High School in 1968. He enrolled in disc jockey college in Chicago, Illinois but was not able to keep up with all the hand controls used back then with one hand. He came back to Starke County and worked at a grain elevator, gas station and parts store. His passion was fast cars. At the age of 19, his father died and along with Donna Allen and the ABC looking the other way, he ran the Oasis for his mother. Frank knew and loved many people in Starke county, loved racing, fishing, tipping a brew-sky, playing cards, telling jokes, talking about old times and about his hopes for his children and so much more. His smile, laugh, and facial expressions always were contagious. You couldn't stay in a bad mood around Frank.On July 4th, 1973, Frank met the girl that would become his life mate. On his parents anniversary, December 28, 1973, Frank married Constance (Conni) Marie Vlach at St. Henry's in Medaryville, Indiana. Frank was baptized at Capital City Christian Church , Frankfort, Ky. In 1994 Frank's job transferred his family to Kentucky. Being a Bobby Knight fan didn't go well with the Wildcat fans which gave way to fun banter with new friends and co-workers. By the time second daughter, Audra, attended and was graduated from U.K. he was cheering for the Cats They raised three biological children Frank saw attain success in his eyes and heart. There were dozens more that looked up to Frank as "Dad", too. All his children live in Frankfort, Ky, just minutes away from lending a hand with their Dad or just visit or drop off grandchildren for precious times with "Papa". Amy generously hosted and lovingly cared her parents for 16 months longer then the original Christmas week planned, in 2017 when Frank's health decline, as well as the rest of the crew: Daughter, Audra Paige Deli-Hoofnagle (James) and children, Carly Marie and (James) Cooper. Son, Frank Carl Deli III (Laken), and children, Lyndi Quinn and Lincoln Boyd. One more in house all around helpmate to the whole family is Jeanie Shell, Frank's sister-in-law who selflessly gave her all to all of us as we ran Frank's last race along with him. Survivors include brother, Harold Ward Beasly, Peoria, Arizona, and Delilah Jane (Beasley) Schrader (Gene) Many beloved cousins, nieces, nephews, in-laws, and friends. Preceding Frank in death are his parents Frank and Augusta Deli, Sister, Loretta Lou (Beasly) Ludvigson (Bob), Nephew, Jeffery Ludvigson and hist win infant sons, great niece Shauna Nicolle Hale, A Celebration of Life will be held at 2 PM CT Saturday, May 18, 2019 at The Oasis in San Pierre, Indiana. Memorials may be made to Conni Deli

God called "last call" for Frank Carl Deli II, former owner of the Oasis in San Pierre, Indiana, Sunday, April 14, 2019 at the age of 69. He left so quickly we imagined he must have taken a hole shot and set a track record John Force may never... View Obituary & Service Information

The family of Frank Carl Deli II created this Life Tributes page to make it easy to share your memories.

Send flowers to the Deli family.