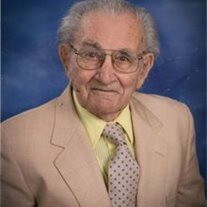 Frank Chester Boilini passed away peacefully at the home of his daughter, Bonnie, in South Bend on Monday, November 27, 2017. Frank was born on November 6, 1920 in North Judson, Indiana to Italian immigrants, William Boilini born in Italy and Theresa Picchietti Boilini born in Chicago. On the farm his family made cheese and provided fresh dairy products to local and Chicago markets. Living most of his life in the rural town of North Judson he graduated from North Judson High School in 1938, opened the North Judson Hardware in 1939 with Leo Seghetti that became the premier expanded Hardware Store in the area. He married Lillian Orlandi Boilini from Chicago, Illinois in 1945 a union that lasted 52 years. They had four children Bonnie Boilini Baxter living in South Bend Indiana, James John Boilini living in Key Largo Florida, Edward Francis Boilini living in Fairfield, Connecticut, and Lawrence Joseph Boilini deceased. His involvement in the community was extraordinary where he was president and board member of several organizations including Town Board, North Judson Pubic Library, Band Boosters, Quarterback Club and Holy Name Society. During his tenure he expanded and developed numerous programs. Frank was a great supporter of the Hoosier Valley Railroad, and Starke County Historical Museum and North Judson Parks. He conceived and developed the Building Trade program at the high school offering many students the opportunity to learn a trade and find employment after graduation. The model he developed spread county wide. He with others directed the Centennial Celebrations for the town of North Judson. His visions were not limited to North Judson. Frank organized the first Dealers' Committee in the National Hardware Association where he was honored for his fifty years in business and his contributions to it including creating various display, identifying specialized marketing by regions and more. Despite being in a smaller market region his efforts were recognized nationally. He and his wife, Lillian were given the opportunity to travel worldwide as a result of his visions. Frank and his wife truly understood the value of education and always encouraged his children and others the live long value of learning. Frank never ceased to be inquisitive and interested in learning regardless the subject. A man born in the era of horse and buggy recognized the excitement and value of technology - google, and "Alexa" became friends at 97. An inspiration to his children and others, he remained involved, well read, and curious until the end - reflecting on his creations, a "drop box" for returning books at the library, whole house vacuum, and more. He enjoyed a variety of music, traveled extensively, and was always problem solving. In retirement he pursued stain glass creations after years of cutting glass at the Hardware Store. He was commissioned to make pieces and participated in many arts and craft shows. Several of his larger pieces are permanently installed in the North Judson Library. He moved to Venice Florida in 2006 where he continued with his stain glass and became involved as a volunteer at the Library. He always talked fondly of his days in North Judson and many wonderful people in the community. Frank could talk to anyone from anywhere and truly was interested in people. He is preceded in death by his parents, his brothers – William Junior and John, his sister – Lorraine Boilini Spoor, his son – Lawrence Boilini. He has one surviving brother, Richard Boilini three living children Bonnie Boilini Baxter (Jim Baxter), Jim Boilini (Mary Lynn) and Edward Boilini (Sharon). He has eight grandchildren Claire Simon (John Simon), Leah Kinney (Daniel Kinney), Gina Boilini, Lauren Boilini, James Baxter (Rachel Boury Baxter), Colette Boilini, Colin Boilini, and Christa Boilini. He has 11 great grandchildren Liam Kinney, Gabriella Simon, Keira Kinney, Matthew Simon, Julia Kinney, Lillian Simon, Sophia Kinney, Daniel Kinney, Frank Navarro, Josephine Baxter, and James Navarro II. In lieu of flowers contributions may be made to the Hoosier Valley Railroad, North Judson Parks, or the North Judson Library. Visitation will be from 2-6 PM CT Sunday, December 3, 2017 at the O'Donnell Funeral Home, Inc. Funeral Mass will be 1 PM CT Monday, December 4, 2017 at the SS Cyril & Methodius Catholic Church, North Judson, Indiana. Burial will be in Saint Jacobs Cemetery.

Frank Chester Boilini passed away peacefully at the home of his daughter, Bonnie, in South Bend on Monday, November 27, 2017. Frank was born on November 6, 1920 in North Judson, Indiana to Italian immigrants, William Boilini born in Italy and... View Obituary & Service Information

The family of Frank C Boilini created this Life Tributes page to make it easy to share your memories.

Frank Chester Boilini passed away peacefully at the home of his...

Send flowers to the Boilini family.