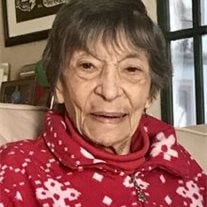 Fran Perren, 84, of North Judson, died Friday, Dec. 29 at 9 p.m. at Starke Hospital. She was born April 13, 1933 in Portageville, Missouri to the late Henry and Hetty Garner. On Sept. 3, 1955 in Springfield, Tenn. she married Cecil Perren. He preceded her in death on Aug. 9, 2002. Fran was raised in the bootheel of Missouri and was a lifelong St. Louis Cardinals fan. She had fond memories of listening to Harry Caray broadcast Cardinals games on the radio. Stan Musial and Bob Gibson were her all-time favorite players. She moved to Memphis, Tenn. after she graduated from high school and worked for the telephone company. While visiting her brother in Gary, Ind. she met Cecil. They settled in the Hessville neighborhood of Hammond, and she worked for many years in the office of Joyce Sportswear in Gary. Fran and Cecil moved to North Judson in 1975. She held numerous paid and volunteer positions with the North Judson-San Pierre School Corporation over the years, including lunchroom/playground supervisor, substitute teacher and teacher's aide. She was active in the Liberty Elementary PTO, chaperoned numerous field trips, served several years as a Girl Scout Leader and was also heavily involved in the North Judson-San Pierre Band Boosters. Fran was also a longtime member of the North Judson United Methodist Church, where she served on several committees, was the financial secretary for many years, appeared in the 1989 production of "Godspell" and assisted with various children's programs. She was a voracious reader and also enjoyed working crossword and word search puzzles. Survivors include a daughter, Mary Perren (Timmy Collins) of North Judson, a sister, Ginny Farmer of Donaphin, Mo. and several nieces and nephews. She was also preceded in death by two brothers: Berlin Garner and Henry Garner, Jr.; and three sisters: Mary West, Ollie Motley and Ina Ellis. A memorial service will take place Saturday, Jan. 13 at 1 p.m. at North Judson United Methodist Church, with visitation there from 11 a.m. until the time of the service. Attendees are encouraged to bring items for the church food pantry or toiletries for Kid's Closet Ministry. In lieu of flowers, memorial contributions may be made to the Fran Perren Preschool Scholarship Fund through the Starke County Community Foundation.

Fran Perren, 84, of North Judson, died Friday, Dec. 29 at 9 p.m. at Starke Hospital. She was born April 13, 1933 in Portageville, Missouri to the late Henry and Hetty Garner. On Sept. 3, 1955 in Springfield, Tenn. she married Cecil Perren. He... View Obituary & Service Information

The family of Fran Perren created this Life Tributes page to make it easy to share your memories.

Send flowers to the Perren family.