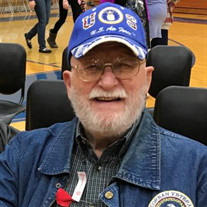 Floyd Carson Rowe Sr, 85, of Winamac, Indiana passed away Tuesday, February 25, 2020 at Porter Regional Hospital after a long battle with an illness. Carson was born to John Rowe and Myrtle (Montgomery) Rowe on March 20, 1934 in Tip Top, Magoffin County, Kentucky. He was married to Ruth (King) Rowe on December 10,1955. When Carson left Salyersville, Kentucky for the first time, he took a Greyhound Bus to Knox, IN, where he got up with his sister Opal Mann. Carson and Opal headed for Chicago, hitchhiking all night to get there. One of Carson’s friends in Chicago asked him to go on a blind date which is where he met his wife of 64 years, Ruth (King) Rowe. Never realizing that when they had met in Chicago, that they only lived 8 miles apart growing up as kids. Carson lived in Middlefork, KY and Ruth lived in Frozen, KY. It took a trip to Chicago and a blind date for fate to take its course. Carson served in the United States Air Force for 4 years (July 1953-July 1957). He traveled many places during his service but ultimately they came to settle in the North Judson area to raise their family. He was a member of the Masonic Lodge, American Legion, Crime Stoppers and was a faithful monthly donor of the Shriners. Many people knew Carson as “Row-boat”, because he loved CB and HAM radios back in the day. Carson retired from the Levy Company in 1984. Carson loved being with family and friends, watching and feeding the birds and, just last year, was a landlord to a host of Purple Martins which was the highlight of many spring and summer days. He enjoyed watching Kentucky and Bluejay Basketball. Most of all he loved to attend church and church activities. His most prized possession was his Salvation by Jesus Christ. Carson was saved Sunday, Nov 15, 1959 at Denham Church. He became a member and was ordained as a Deacon in October, 1966. He is survived by his loving wife of 64 years, Ruth Rowe; Five Children, son Freddie John (Sherri Tubbs) Rowe of Russiaville, IN, Kenny Mack (Mary) Rowe of North Judson, IN, Floyd Carson (Maryann) Rowe JR. of Salyersville, Ky., Kathy Wera of North Judson, IN, Ruby Ann (Rabion) Frasure of Winamac, IN; 10 grandchildren, 8 great grandchildren, and a lousy dog Abbie; two brothers Hillard James Minix of North Judson, IN, and Bobby Ray Minix of North Judson, IN; one sister, Hattie Campbell of North Judson, IN; Preceded in death by parents, John Rowe and Myrtle Montgomery Rowe; one brother Ocie Rowe; four sisters, Opal Mann, Glena Faye Maupin, Dixie Whitaker, and Phyllis Ann Gross. Carson had a tremendous amount of nieces and nephews and great nieces and nephews. Carson describes himself as “I am a winner”. You could ask him how he was doing, and his reply was always “Great!” By the testimony he left here on earth, we can be assured that he is doing beyond “Great!” as he has reached his final goal of getting to heaven, making him a true “Winner.” Visitation will be from 4-8PM CT Friday, February 28, 2020 at the O'Donnell Funeral Home, Inc., North Judson, Indiana and after 10 AM CT Saturday, February 29, 2020 at the church. The Funeral Service will be held 11 AM CT Saturday, February 29, 2020 at the Denham Freewill Baptist Church. Burial will be in the Highland Cemetery with Military Honors by the North Judson American Legion Post 92.

The family of Floyd Carson Rowe created this Life Tributes page to make it easy to share your memories.