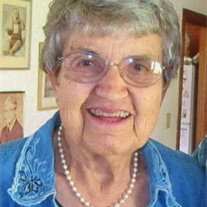 FLORA EDNA (KOTHE) MATZAT Born: June 8, 1924 Died: February 7, 2017 North Judson, IN – Flora Edna (Kothe) Matzat was born June 8, 1924, in Steeleville, Illinois, the youngest of six children born to Herman and Bertha (Eilers) Kothe. She was baptized on June 15, 1924 and was confirmed in 1938 at St. Paul Lutheran Church, Wine Hill, Illinois. Flora graduated from Steeleville and Campbell Hill Community High Schools. On June 26, 1948, she married Ewald Matzat in Steeleville, Illinois. They were blessed with five children. Flora died on Tuesday, February 7, 2017, at her home in North Judson at the age of 92 years. She is survived by four children: Dolores Matzat, North Judson, IN; Eugene (Linda) Matzat, Walkerton, IN; Paul (Barbara) Matzat, Greenwood, IN; and Annette (Matzat) Zeller, North Judson, IN; and sister, Marie Ahrens, of Addison, IL. She is also survived by 11 grandchildren and 18 great-grandchildren. She was preceded in death by her parents, Herman and Bertha Kothe; her siblings Anna Wolters, Albert Kothe, Edward Kothe, Edna Buescher; her daughter, Nancy (Matzat) Woolery; and her husband of 65 years, Ewald Matzat. After high school graduation, Flora worked at the Lutheran Children's Home in Addison, IL. When Flora was asked to sew bridesmaids dresses for Harold and Lelia Matzat's wedding, she met the other Matzat brothers. Ewald was the first brother to write to her, and it didn't take long before they were a couple. Flora helped establish the family home by raising a big garden, preserving fruit and vegetables, milking cows, raising chickens and sewing. Flora and Ewald encouraged musical and academic education for their children, assuring that all graduated from college. Flora was an active member of St. Peter Lutheran Church, North Judson, having sung in choir and participated in PTL, LWML, Ladies Aid and was a charter member of Artisans. She faithfully attended church and Bible studies. She was also trained in Stephen Ministry, which focuses on caring for others who were hurting. Flora could also be counted on to provide baked goods or other side dishes for church functions. Flora was also active in the community. Encouraging her children to participate in 4-H, she served as a leader of the Merry Makers 4-H Club. Flora was a gifted baker. She frequently entered her yeast crescent dinner rolls and crispy nut "squirrels" in open class at the fair, acquiring many ribbons over the years. She regularly attended annual meetings of Kankakee Valley REMC and Starke County Farm Bureau Co-op. Flora had a talent for quilting. She completed dozens of quilts, many as gifts for her children's weddings or upon the arrival of new grandchildren. She quilted a special quilt for each of her eleven grandchildren as a high school graduation gift. Flora's gift of hospitality was unmistakable. When visitors would stop by to say "Hi," they were often invited to share coffee and coffeecake (and many times a meal) around the dining room table. She was also generous with her garden vegetables and poultry and dairy products. A funeral service will be held at 1:00 p.m. CST on Sunday, February 12, 2017 at St. Peter Lutheran Church, North Judson, IN. Visitation will be held on Saturday, February 11, from 4:00 to 8:00 p.m. CST at O'Donnell Funeral Home in North Judson. Visitation will also take place on Sunday, February12, at the church one hour before the funeral service. Burial will be in Highland Cemetery, North Judson, IN. The family invites memorials for Flora Matzat be given to St. Peter Lutheran Church and School, North Judson, or to a charity of your choice.

The family of Flora Matzat created this Life Tributes page to make it easy to share your memories.

Send flowers to the Matzat family.