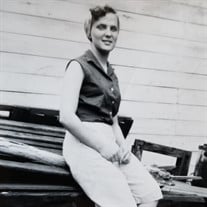 Dolores Hughes, 87, passed away Friday, December 20, 2019, of natural causes. She was born August 12, 1932, in East Chicago, Indiana (Harbor) to the late Jenny Brezinski and Joseph Luptak. Dolly was raised in her grandma Julia’s house whom she loved dearly for 5 years and always said that was the happiest time of her childhood. Then she lived with her mom and Tony Poninski for 14 years with her sister, Mary Ann and brother, Jimmy. At 18, she married her first husband, who preceded her in death, Regis Kennedy and had 7 children: Regina (Robert) Rios, Regis (Diane) Kennedy, Bridie (John) Jurasevich, Sheila Kennedy, the late Denis Kennedy, Kitty (Rick) Dominguez and Steven (Amie) Kennedy. At 36 she married her second husband, who preceded her in death, John Hughes and had 2 children: Johnna (David) Serrano and John Hughes. Dolly loved all of her grandchildren and would have raised all 13 if she could: Tara and Gina, Robert, Erin and Ryan, Johnny, Brandon and Bridie, Lauren, Keira, Kelly and Caitlin and Julie and Joanna. Dolly moved to North Judson in 1998 because she always wanted to live on a farm and was close with her Aunt Marie, whom she would visit often with her children. Mom lived the last years of her life with her late friend and companion, Jack Morlan, whom she loved dearly. Mom and many aunts and uncles, whom she adored, including: Uncles Joey, Stanley, Petie, Martin, Victor, George and Stevie and Aunts Lottie, Josie, Helen, Sophie and Marie. A Memorial Mass will be held to celebrate Dolores's life, Saturday, January 11, 2020 at SS. Cyril & Methodius Catholic Church, North Judson, Indiana. Wherever you are this holiday season, say a prayer for Dolly as the Lord welcomes her home. Any donations make to Jesus and be kind.

The family of Dolores Hughes created this Life Tributes page to make it easy to share your memories.

Send flowers to the Hughes family.