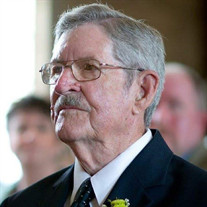 Delmer Campbell, age 91of North Judson, passed away Thursday, July 11, 2019 at Pulaski Memorial Hospital. Born December 29th 1927 in a place called Hardshell located in Breathitt County Kentucky. His parents were Zachariah “Zack” Campbell and Ada Miller Campbell, He had 2 brothers, Amel Campbell and Pearl Campbell. At the age of 16 he left Kentucky and traveled by bus alone to Chicago in seek of work, he had 6 dollars in his pocket and no potential job prospects, yet he was successful and found work. He worked numerous jobs ranging from working at a Cardboard company, Holloway Candy Company, Latrobes Carbide Company, and even owned a Bar. He said his greatest achievement came when he met a young lady selling tickets at a movie theater named Hattie Rowe. They just kind of hit it off. What’s amazing is that two people who were born 30 miles apart in a different state could find each other in a big city like Chicago and fall in love, “I guess it was just meant to be” They got married on March 17th 1950 in Chicago IL. There they had 4 wonderful children, Phyllis Campbell Wentz, Joyce Campbell Bales, Steven Zackery Campbell and Jimmie John Campbell. “My God he sure loved his kids” In 1965 they moved to North Judson, Indiana, where they continued to raise their family. In 1989 Delmer retired from New York Blower Company located in LaPorte IN. where he was a machine operator for many years and a contract negotiator for the Teamsters Local 298 Delmer loved to hunt and fish, he loved to visit his friends and vacation in Tennessee, Delmer and Hattie would go to Fan Fair every year in Nashville and mingle with people that had their same interests. Sometimes they would call and say hey, we are in Georgia, sometimes they would be in Arizona, they just loved to drive and sight see, never really had a destination, just drove until they decided to head back home. He is survived by his wonderful wife of 69 years Hattie Campbell, 2 daughters Phyllis Campbell Wentz "Howard" of Winamac, IN, Joyce Campbell Bales "David" of North Judson, 2 sons Steven Z Campbell of North Judson and Jimmie J Campbell "Tonya" of North Judson Delmer had 11 grand children, 7 great grand children and more coming. Delmer and Hattie were married for over 69 years and he told me he loved every minute of it and would do it all again the same way if he had the chance Delmer was preceded in death by his father Zack, his mother Ada and his 2 brothers Amel and Pearl Campbell. Delmer will be greatly missed, for he was a wonderful husband, father, grand father and friend to many. Visitation will be held 11 AM CT Monday, July 15, 2019 at the O'Donnell Funeral Home, Inc., North Judson, IN. Funeral Services will be 1 PM CT Monday, at the funeral home. Burial will be in the Highland Cemetery. In lieu of flowers, the family request memorials be made to the Alzheimer's Association at ALZ.ORG.

The family of Delmer Campbell created this Life Tributes page to make it easy to share your memories.

Send flowers to the Campbell family.