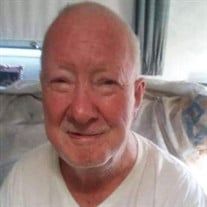 Daniel Williams Jr., 87, of Winamac, Indiana, passed away at his home where he was surrounded by his family. Dan was born on December 28, 1934, in Knox, IN. He married the first love of his life, Vonda Rowe. Together, they had four boys and three girls: Ray (Bonnie) Williams, Yvonne (Jeff) Attinger, Richard (Karen) Williams, Ruthie (Karl) Taylor, Rosemary (Joe) Minix, Walter (Michelle) Williams, and Dennis Williams. Dan drove tractors and farm equipment for Gumz Farms. His reputation was one of hard work and unfailing reliability. Dan loved the simple things in life and always had a smile on his face. Spending time with his family and pets and watching birds were some of his favorite activities. In addition to his love of blue jeans and flannels as well as beans and cornbread, Dan also enjoyed gospel music. Church on Sunday was a huge part of Dan's life. He believed kids should treat their parents with respect, especially their mothers. Whenever he saw his children, he gave them a hug and kiss and made sure to tell them he loved them. If he were still here, he would encourage you to spend time with your kids, hug them, and always tell them goodbye. Dan had 20 grandchildren: Daniel (Kristian), Jeff (Julie), Josh (Krystal), Sarah, Amanda (Brandon), Kevin (Melissa), Elizabeth (Brett), Heather (Chastity), Allen (Amanda), Richard (Misty), Tim (Erica), Andrew (Britni), Yolanda (preceded in death), Jerry (Deanna), Dustin (Destiny), Amber (Aaron), Vonda (Michal), Mickayla (Ethan), Emily (Dominic), and Vince. Dan also has 34 great-grandchildren Tayor, Shawna, Tristan, Jayda, Kylie, Hailey, Austin, Alyviah, Brody, Natalee, Gavin, Owen, Oryona, Hannah, Bentley, Mackenzi, Peyton, Binson, Zoey, Wyatt, Tessa, Lucas, Lauren, Jaycee, Tod, Corbyn, Ali, Aiden, Seth, Emmette, Oliva, Sophia, Kohen, and Liam. Dan also has one great-great-grandchild, Gannon. He is proceeded in death by his son, Richard Williams. There will be a viewing on Monday, February 7 from 11 AM-1 PM (EST), followed by the funeral at O'Donnell Funeral Home in North Judson, Indiana. Dad will be deeply missed. His life was a testimony to his faith. Therefore, this isn't goodbye, just until we meet again. Love, Your children.

Daniel Williams Jr., 87, of Winamac, Indiana, passed away at his home where he was surrounded by his family. Dan was born on December 28, 1934, in Knox, IN. He married the first love of his life, Vonda Rowe. Together, they had four boys and... View Obituary & Service Information

The family of Daniel Williams Jr. created this Life Tributes page to make it easy to share your memories.

Send flowers to the Williams family.