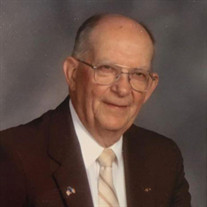 Charles George Ness, 93 was welcomed into his Heavenly Home by his Savior, Jesus Christ. He passed away on December 15, 2020 in the LaPorte Hospital after a brief illness. Charles was born on December 6, 1927 to Jacob and Emma Ness. He grew up in North Judson where he resided all his life. He attended St. Peter Lutheran School when it was a one room schoolhouse. He graduated from North Judson High School in 1945. He entered the U. S. Navy on September 7, 1945 and was honorably discharged on December 6, 1948. On May 6, 1950, Charles married his true love, Doris L. Chesak. Together they raised four children. He owned Ness Meat Market on Main Street in North Judson for about 10 years, attended Coyne Electrical Trade School in Chicago for one year and began a career with McGill Manufacturing, a precision bearing manufacturer in Valparaiso, IN. He was promoted to plant engineer at a new branch plant in Culver, IN after a few years and was with McGill for over 25 years until his retirement. Chuck was an active member of St. Peter Lutheran Church holding numerous offices helping to guide the church as his Lord advised him to do. He also volunteered in numerous organizations including North Judson Public Library Board for 16 years, Meals on Wheels for 25 years, Hoosier Valley Railroad Museum founding member, North Judson Band Boosters during his children’s tenure in the school system. He enjoyed motorcycling adventures and bowling in his early years and was an avid golfer following his retirement. Charles is survived by his four children, Nadine (Mark) Pearson of Kokomo,IN, Bruce (Nancy) Ness of Sudbury, VT, Cathy (Gary) Bear of Lafayette, IN and Vicki (Dave) Howarth of Columbus, IN. He is also survived by 7 grandchildren (Aaron Pearson and Cara Eveland), (Justin, Cameron and Zachary Bear), (David and Jacob Howarth) and 8 great grandchildren. Due to the pandemic, there will not be a public service, only a private graveside service for the immediate family. A memorial service will be planned for a later date. Memorials can be made to St. Peter’s Lutheran Church Sounds of Praise and the Hoosier Valley Railroad Museum

Charles George Ness, 93 was welcomed into his Heavenly Home by his Savior, Jesus Christ. He passed away on December 15, 2020 in the LaPorte Hospital after a brief illness. Charles was born on December 6, 1927 to Jacob and Emma Ness. He grew... View Obituary & Service Information

The family of Charles G Ness created this Life Tributes page to make it easy to share your memories.

Charles George Ness, 93 was welcomed into his Heavenly Home by...

Send flowers to the Ness family.