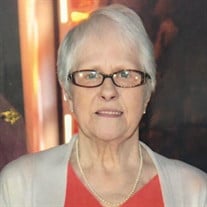 Carolyn M. Gardin, 77, of North Judson went home to be with the Lord on August 9, 2020, after a long battle with cancer. Carolyn was born in Manito, Illinois on February 22, 1943, the seventh of ten children born to Herbert I. Schappaugh and Frances E. Sanmann Schappaugh. On April 4, 1964 she married the love of her life, Guy A. Gardin. The couple was blessed with four children. Carolyn loved to sing, and she filled her home with music, harmonizing in her rich alto with any song she heard. As a student at Forman High School in Manito, she lettered in choir. Following her high school graduation, Carolyn attended and graduated from secretarial school in Omaha, NE, then began her secretarial career at Santa Fe Railroad. After her marriage, she worked for 37 years as the church secretary at St. Peter Lutheran Church in North Judson before retiring. Although she was raised in a small town, Carolyn had the courage and determination to move all by herself to Chicago, IL to work as a messenger for Santa Fe Railroad. When she arrived in Chicago she stayed briefly at the YWCA, where she met Edie Wickizer and Bev Redlin from North Judson. The three women rented an apartment together, and Edie and Bev introduced Carolyn to a tall, redheaded Swede named Guy. They fell in love, married, and started their family. Carolyn enjoyed the friendships she cultivated in her Women’s Bible Study groups, St. Peter Lutheran Choir, and Artisans Club. She was an excellent baker, and her fruit pies, homemade bread, and chicken pot pie were favorites of her family and friends. She so perfected her Swedish Pepparkakor Christmas cookies that she had to hide them and portion them out to make them last through the season. Carolyn also taught herself to sew, and she crafted many beautiful Halloween costumes and articles of clothing for her children. She prided herself on keeping a clean house that could welcome visitors at a moment’s notice. Carolyn faced many trials in her life, which gave her the special ability to see other people’s pain and to reach out to them with a deep level of compassion. She had the most wonderful, infectious laugh! When she got the giggles, everyone around her got the giggles. Carolyn is survived by her loving husband of 56 years, Guy; her three daughters, Lori (Ted) White of North Judson, Lisa (Greg) Engel of Medaryville, and Lanette Gardin (Stephen Reif) of Valparaiso; her son Steven (Jan) Gardin of Wichita Falls, TX; her granddaughter, Samantha (Robb) Stephenson; her grandsons, Adam (Liz) Engel and Simon (Amanda) Engel; Thaddeus (Jessica) White and Jonas (Kacie) White; Marc (Andrea) Gardin, Thomas Gardin, and Jacob (BreeAnna) Gardin; and great-grandchildren, Henry, Lucy and Annabelle Engel and Charlotte Gardin. Also left to cherish her memory are her sister, Verla (Butch) Pannier of Topeka, IL, her brother, Paul (Suzie) Schappaugh of Havana, IL, and numerous nieces and nephews. Visitation will be held on Friday, August 14 from 11:00 – 1:00 CST at St. Peter Lutheran Church in North Judson, IN. A funeral service will begin at 1:00 pm with Rev. Gary Wickert presiding. Christian burial will follow at San Pierre Public Cemetery in San Pierre, IN.

Carolyn M. Gardin, 77, of North Judson went home to be with the Lord on August 9, 2020, after a long battle with cancer. Carolyn was born in Manito, Illinois on February 22, 1943, the seventh of ten children born to Herbert I. Schappaugh and... View Obituary & Service Information

The family of Carolyn Marie Gardin created this Life Tributes page to make it easy to share your memories.

Send flowers to the Gardin family.