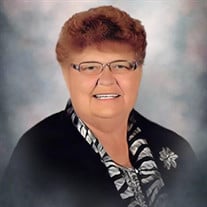 Barbara “Barb” Jean Comeno-Platt, 74 of Las Vegas, Nevada, passed away on Monday, January 4, 2021 in Las Vegas, surrounded by family. She was born May 26, 1946 in Knox, Indiana to the late Fred and Dorothy (Row) McIntire. Barb graduated from Knox High School. She married Salvatore “Sam” Comeno of North Judson, Indiana on July 20, 1963 who preceded her in death. While living in North Judson, Barbara drove school bus for 15 years. She also ran the family’s restaurant business, Comeno’s Sugar Snack Shack, (formerly the School Store). After moving to Las Vegas, she was a regional merchandiser for McLane’s servicing convince stores in the Vegas valley. She was retired for many years and enjoyed traveling, camping and above all spending time with family. Barbara was active in The Las Vegas Tall Club, where she was a long-time board member and dedicated endless hours to the Club’s philanthropical and social events. Barbara is survived by her current husband Blaine Floyd Platt of Las Vegas, NV whom she married February 5, 2000, son Brian (Cindy) Comeno of Las Vegas NV, daughter Christine (Dean) Lauer of Las Vegas NV, 2 grandchildren Katelyn and Samantha both of Las Vegas NV, sister Betty Pflugshaupt of Hamlet IN, and brother Dean McIntire of Knox, IN. She was also preceded by 2 brothers Fred Jr. and Howard “Gene” McIntire. Visitation in Las Vegas is Tuesday, January 12 from 4 to 7pm at Davis Funeral Home. Graveside service will be at 12pm CT on Saturday, January 16 at Highland Cemetery, North Judson Indiana with arrangements being made by O’Donnell Funeral Home, Inc.

The family of Barbara Comeno-Platt created this Life Tributes page to make it easy to share your memories.

Send flowers to the Comeno-Platt family.