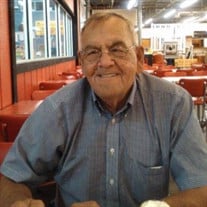 Arnold Lee Sowards, Sr of North Judson IN passed away March, 17 2021 at 9:04 pm in LaPorte, IN. He was born June 7, 1943 in Fort Blackmore, VA to Calvin Sowards, Sr & Loreane (Bennett) Sowards. He was retired from Norfolk & Southern Railroad... View Obituary & Service Information

The family of Arnold Sowards created this Life Tributes page to make it easy to share your memories.

Send flowers to the Sowards family.